Arts and entertainment  |  UW and the community  |  UW Notebook

Screens large and small babble away at us — and yet sometimes there just isn’t anything good on. How about a century-old film classic?

There was a whole world of silent cinema in the decades before modern Hollywood, with its own array of glamorous stars, eccentric directors, faithful book adaptations and sweeping adventure sagas.

At the University of Washington, no know knows that era and many other aspects of film better than Jennifer Bean, associate professor and associate chair of the Department of Cinema & Media Studies.

UW Notebook caught up with Bean for some suggestions of free silent film viewing opportunities this fall. Because when you’re out of stuff to watch, everything old is new again.

UW faculty and staff have access to lots of classic silent films, and other films through the Alexander Street online collection. Learn more.

Slapstick Sundays. Each week, on YouTube, film historian Steve Massa and silent film accompanist Ben Model present three slapstick shorts from the silent era in their Silent Comedy Watch Party, with Model at the piano. The films are around 10-14 minutes long and the two give each a short introduction about the actors and quality of the film copy. 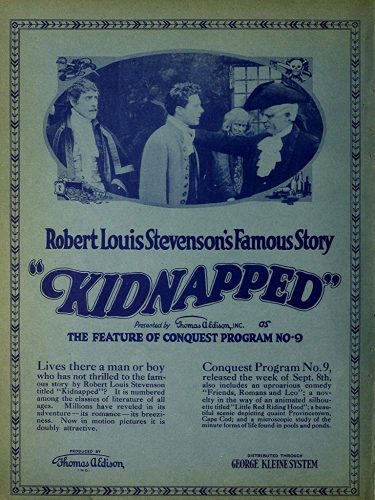 Poster for the 1917 silent film version of the Robert Louis Stevenson story “Kidnapped.”

“Ben streams from his living room, and plays the piano while projecting the shorts — often in 16 mm, on the wall,” Bean said. “Fun!” The stream goes live a few minutes before the show’s start at 3 p.m. EDT Sundays on Model’s YouTube channel.

From London online: Kennington Bioscope, a silent film screening series based in

London at the Cinema Museum, has moved online during the pandemic, and is now live-streaming special silent-era films and archiving the streams for later accessibility. “The array of programs is quite amazing,” said Bean. A number of films are available, including “Kidnapped” from 1917. More on YouTube.

From The Netherlands: Bean calls the Eye Filmmuseum in Amsterdam, which manages more than 40,000 films of all genres “among the best of the world’s archives of early cinema.” Titles from the silent era and beyond available on the museum’s YouTube channel.

Bean is the Robert Jolin Osborne Professor of Cinema and Media Studies. Osborne was an actor and film historian best known for 20 years as a host for Turner Classic Movies.