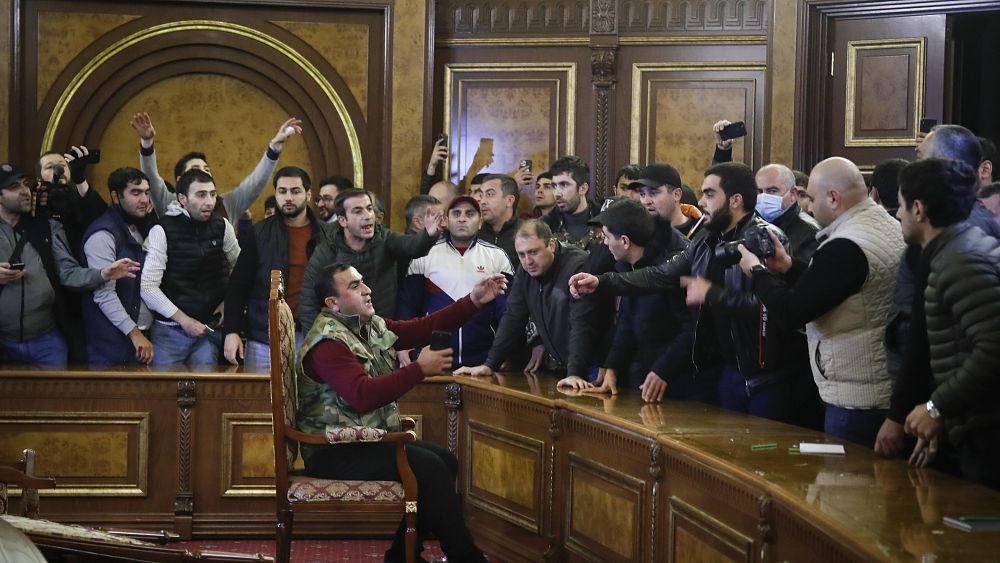 Hundreds of Armenians, angry at a peace deal between their country, Azerbaijan and Russia, broke into government buildings in the capital Yerevan early Tuesday in protest.

Armenia and Azerbaijan announced an agreement early Tuesday to halt fighting over the Nagorno-Karabakh region under a pact signed with Russia.

Soon after the announcement, thousands of people streamed to the main square in the Armenian capital of Yerevan to protest the agreement, many shouting “We won’t give up our land!” Some of them broke into the main government building, saying they were searching for Prime Minister Nikol Pashinyan, who apparently had already departed.

Pashinyan condemned the incident on Facebook that a “computer, watch, perfume, driving license and other things have been stolen” from his residence. He added: “Of course, I am in Armenia and fully continue to do my work as Prime Minister.”

Meanwhile, in Baku, there were scenes of celebration. The streets of the capital were rammed with traffic, and people danced on cars, waving the flags of both Azerbaijan and Turkey.

The latest flare-up of violence between Armenian and Azerbaijani forces over the region started on September 27 and has left hundreds — if not thousands — dead.

Several cease-fires have previously been called but were almost immediately violated by both parties.

Pashinyan said that the decision was based on “deep analyses of the combat situation and in discussion with best experts of the field”, adding that while it was “not a victory but there is not defeat until you consider yourself defeated.”

Azerbaijan’s president, Ilham Aliyev, said the deal held “historic importance” and was a “capitulation” from Armenia.

What’s in the deal?

The agreement calls for the deployment of nearly 2,000 Russian peacekeepers, as well as territorial concessions.

In all, 1,960 Russian peacekeepers are to be sent to the region under a five-year mandate.

Russian President Vladimir Putin said in a televised address that the peacekeepers would be deployed to patrol frontlines.

Euronews’ correspondent Galina Polonskaya explains how the peace deal is being perceived in Russia:

The deal demands that transport links are established through Armenia linking Azerbaijan and its western exclave of Nakhchivan, which is surrounded by Armenia, Iran and Turkey.

It also calls for Armenian forces to hand over control to Azerbaijan of some areas it held outside the borders of the Nagorno-Karabakh region.

Under the deal, Baku will also hold on to areas of the region that it has taken during the violence.

It lays out that: “Internally displaced persons and refugees shall return to the territory of Nagorno-Karabakh and adjacent areas under the supervision of the United Nations High Commissioner for Refugees.”

All prisoners of war, hostages and other detained persons, as well as the deceased are to be exchanged.

Dr Laurence Broers told Euronews that the deal saw Azerbaijan “ostensibly gain many of its objectives” which he said reflects the military situation” but added he did not think Russian personnel heading to the region served in Baku’s interests.

“In a sense, everybody loses something here,” he added.

What’s happening on the front lines?

Azerbaijan claimed on Sunday that its forces had taken control of the strategically key city of Shusha/Shushi in the Nagorno-Karabakh region where fighting with Armenian forces has raged for more than a month.

In a televised address to the nation, Azeri President Ilham Aliyev said: “Shusha is ours — Karabakh is ours,” using the Azerbaijani version of the city’s name.

A spokesman for the Armenian separatist leaders of Nagorno-Karabakh, Vagram Pogosian, on Monday confirmed the claims in a statement posted on Facebook, saying: “Unfortunately, we are forced to admit that a series of failures still haunt us, and the city of Shushi is completely out of our control.”

“The enemy is on the outskirts of Stepanakert,” he added.

Taking Shusha/Shushi is significant as it is strategically located on heights 10km south of the city known as Stepanakert for the Armenians and Khankendi to Azerbaijan in Nagorno-Karabakh.

It also has a huge symbolic value both for the Azeris and the Armenians.

Russia said on Monday that one of its military helicopters was shot down in Armenia, near the border with Azerbaijan, killing two servicemen and wounding another.

Azerbaijan has claimed responsibility for the incident and apologised to Russia.

The incident occurred near the border with the Azerbaijani exclave of Nakhchivan.

The former Soviet states of Azerbaijan and Armenia fought a bloody war over the mountainous region of Nagorno-Karabakh in the early 1990s.

Thousands were killed on both sides. Hundreds of thousands of people were displaced.

The war ended with a truce in 1994, although there has been sporadic violence since.

How did Costa Rica become the greenest, happiest country in the world? – Euronews