Blog
Home Music Haydn: where to start with his music – The Guardian
Music

Haydn: where to start with his music – The Guardian

Europe’s most celebrated composer in the late 18th century, Joseph Haydn (1732-1809) was known for his brilliant synthesis of emerging styles, which helped set the course of western classical music as we know it. Famed as the father of the symphony and of the string quartet, in reality he invented neither – but he did consolidate new principles of musical form, based on balance and proportion, expectation and fulfilment. Haydn’s gift was in flexing the rules to ensure variety, creating tensions and dramatic effects. As humorous as he was earnest, Haydn always reveals his deep humanity in his music.

Deutschland über alles, the German national anthem – and Austria’s before that – was originally Haydn’s patriotic anthem written for Emperor Francis II, Gott erhalte Franz den Kaiser. Haydn also used the tune in his String Quartet Op 76 No 3, thus the “Emperor” Quartet. It’s also the hymn Glorious Things of Thee are Spoken. Haydn’s Trumpet Concerto is a favourite processional, while the slow movement of his Surprise Symphony – where a gentle theme is punctuated by a startling fortissimo chord – is one of the first tunes taught in children’s music lessons.

He was born in Rohrau in 1732; his father was a wheelwright, his mother a cook, and his younger brother Michael would also be a composer. At barely six, Joseph’s gifts saw him uprooted to become a choirboy in Hainburg, then talent-spotted for St Stephen’s cathedral choir in Vienna. This experience of the last throes of baroque music stood him in good stead: Haydn would later say he learned most by listening. He became a freelance musician – singing, playing, teaching – extending his sketchy education by diligent study of counterpoint and theory. Working briefly as valet-accompanist to the composer Nicola Porpora (singing teacher of the famous castrato Farinelli), he was introduced to many of Vienna’s cultural movers and shakers, among them imperial court poet Metastasio and composers Hasse and Gluck.

Now getting commissions in the city’s aristocratic circles, Haydn began writing symphonies in the service of Count Morzin. Improving prospects saw him wed Maria Anna Keller, sadly not a marriage made in heaven. But the job of a lifetime came in 1761, when prince Paul Esterházy – super-wealthy, music-loving – appointed him vice kapellmeister at the Esterházy Palace in Eisenstadt. Haydn was given full rein as kapellmeister when the extravagant Nicholas succeeded his older brother the following year. Nicholas built a summer palace, at Esterháza, out in the sticks near Ferto over the border in Hungary, and while Haydn never lost touch with Vienna, he wrote that being so remote had forced him to be original. 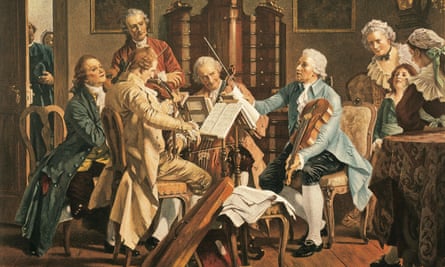 Music-making at Esterháza could be intimate, as in the baryton trios (Nicholas was obsessed with this soon-to-be-obsolete stringed instrument), or celebratory, as in name-day cantatas or masses. For the court’s 25-strong orchestra Haydn wrote symphonies – the Trauersymphonie is Haydn in heart-on-sleeve dramatic mode – and concertos, the Cello Concerto in C among them. For a newly constructed opera house, Haydn also composed operas. Il Mondo della Luna, setting Goldoni’s comedy about a bogus astronomer, inaugurated a new season in 1776, while Haydn himself was proud of La Fedeltà Premiata, with its elements of both serious and comic opera. Haydn acquired a name for himself in circles well beyond Esterházy, and Nicholas valued him: on learning that Luigia Polzelli, a singer in his employ he had been about to dismiss, was the composer’s lover – almost certainly the father of her second son, Antonio – the prince kept her on.

By the 1780s, Haydn’s contract permitted him outside commissions. The Seven Last Words of Christ was written for Cádiz’s Oratorio della Santa Cueva, its far-ranging keys and final movement’s depiction of the earthquake after the crucifixion remarkably daring. By 1790, it was not just the music that travelled. After Nicholas’s death, his son Anton reduced Haydn’s duties, which allowed the composer to accept an invitation to London from impresario JP Salomon and a commission for symphonies. Advance publicity hailed the arrival of Europe’s “most celebrated composer”. Sailing from Calais to England on New Year’s Day 1791 was symbolic: the visit would spell a new lease of life and artistic freedom. The London symphonies were ecstatically received and Haydn found himself feted as the “Shakespeare of music”. His compositions from this decade signal creative renewal in every genre, songs and piano trios included. And as he briefly teaches the young Ludwig van Beethoven in Vienna, the vast span of his career from the late baroque to the beginnings of the Romantic movement becomes clear. 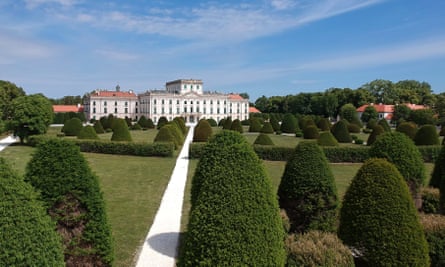 The Esterházy Summer Palace in Fertod, Hungary, completed in 1766, home for Haydn and his employer, Prince Esterházy Photograph: Csaba Krizsan/EPA

War was an almost constant background in 18th-century Europe. In 1740, Maria Theresa’s accession as empress of the Roman empire had triggered the war of Austrian succession, followed by the seven years’ war. Maria Theresa’s arch-rival was Frederick the Great, the employer of JS Bach’s son, Carl Philipp Emanuel, much admired by Haydn and whose influence he gratefully recognised. This was also the age of the Enlightenment, of Diderot, Rousseau and Voltaire, and, thanks in part to friendships and connections made in Vienna, Haydn kept in touch with the wider intellectual world, eagerly amassing books. He suggested that he sometimes dealt with moral and philosophical issues in his music. His symphony No 22 is known as “The Philosopher”, though it’s not a name given by Haydn.

Thanks to the burgeoning music publishing industry, Haydn’s music became popular across Europe. In Paris, Chevalier de St-Georges commissioned symphonies for the Concert de la Loge Olympique in the 1780s (the Paris symphonies, Nos 82-87). In the audience to hear them was Maria Theresa’s daughter Marie-Antoinette. The French revolution meant she would not remain queen for much longer, but her liking for Symphony No 85 led to its nickname, La Reine. Haydn’s London concerts at the Hanover Square and King’s Haymarket rooms are further testimony to this growing phenomenon of music for public edification and entertainment rather than for a religious context or for private performances for the ultra-privileged. 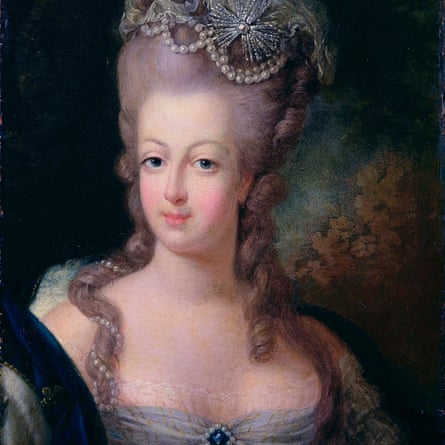 This was also the age of scientific advancement. In June 1792, Haydn visited Observatory House in Slough, home of the eminent astronomer and discoverer of Uranus, William Herschel, and his sister Caroline, also an astronomer. Haydn did not meet Herschel that day but inspected his 40-foot telescope, then the largest in existence. Did this visit later have a bearing on the opening of his oratorio The Creation – based on the Book of Genesis and on Milton’s Paradise Lost – The Representation of Chaos? It is one of his most arresting pieces of music, its untethered harmonies and the building of acute tension only released with the chorus’s fortissimo declamation of the word “Light!”

Victor Weisskopf, a former director of Cern in Switzerland, liked playing a recording of this passage when lecturing on cosmology in the 1960s. (By way of footnote: a crater on the moon was named for Herschel, one on Mars is now named Haydn.)

As well as The Creation, and The Seasons, the ageing Haydn – a devout Catholic, who habitually wrote “In nomine Domini” at the beginning of every piece and “Laus Deo” at the end – returned to settings of the mass, now on a larger scale. His knowledge of the horror of the French revolutionary wars was reflected in his Missa in Tempore Belli (Mass in Time of War) and the Missa in Angustiis (Mass in Troubled Time, also known as the Nelson Mass). French respect for Haydn’s status meant that in 1809, his final year, when Napoleon invaded Vienna again, two French soldiers were ordered to guard the composer’s door to ensure his safety.

Why does he still matter?

Beethoven’s anniversary year is a good moment to recognise that, without Joseph Haydn, there would not have been Beethoven. The younger man grudgingly said that he hadn’t learned that much from him, but everything that music had become and that Beethoven had absorbed was coloured by Haydn’s often radical practice. Mozart, to whom Haydn was something of a mentor, dedicated quartets to him in gratitude for his example. Master of melodic invention, his fashioning of simple motivic cells from which evolve whole movements – even entire works – would become a hallmark of his style. The craft, emotional acuity and wit of his music still communicates vividly. 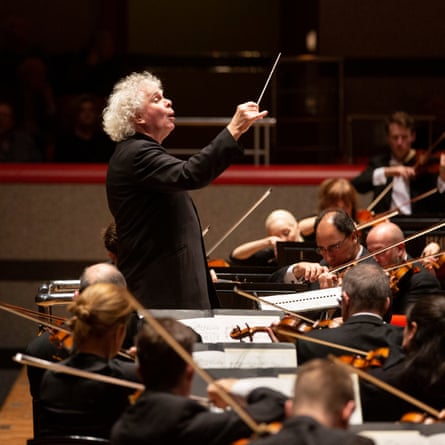 The Esterházy connection meant that conductors such as Antal Dorati with the Philharmonia Hungarica and, more recently, Adam Fischer with the Austro-Hungarian Haydn Orchestra, made it their business to record the complete symphonies, all 104 of the numbered ones – a treasure trove.

For many, though, the period performances of Nikolaus Harnoncourt, Frans Brüggen and Christopher Hogwood have the edge. Haydn has been a fundamental for Simon Rattle, also for Mariss Jansons. There is great clarity in performances by the Quatuor Mosaïques, while both the Kodály Quartet and Takács Quartet bring Hungarian sensibilities to their authoritative playing.

John Eliot Gardiner’s recordings of Haydn Masses with the Monteverdi Choir and English Baroque Soloists are always rewarding and John McCabe offered a composer’s insight in his admirable mid-1970s recording of the complete piano sonatas. Go to the Florestan for the piano trios, and Cecilia Bartoli is a richly expressive Haydn singer.

Music on your mind: Why do certain songs strike a deeper chord than others? – Toledo Blade