The Population Foundation of India has promoted family planning and female empowerment in villages and urban slums for 50 years. It is part of a band of Indian charities that together receive more than $2bn a year in foreign donations to fight malnutrition, maternal mortality and illiteracy.

But Narendra Modi’s government regards most foreign-funded charities as irritating or even subversive. Last week, the prime minister’s administration pushed though a law tightening restrictions on non-profit organisations, who warned that the changes jeopardised their ability to operate.

“This is going to greatly weaken the NGO sector,” said Poonam Muttreja, executive director of PFI, which received $3.8m in foreign donations last year. “We are going to lose our voice, our freedom and our ability to speak up and shout out.”

New Delhi is deeply suspicious of foreign-funded charities’ activities in India. In 2014, an Intelligence Bureau report accused groups such as Oxfam, ActionAid and Save the Children of “negatively impacting economic development”.

Some non-profit organisations are suspected of supporting terrorism while Christian charities are also viewed with distrust by Mr Modi’s nationalist support base, which believes their sole aim is to convert Hindus.

The new law was driven through a truncated parliamentary session without warning or public debate, catching non-profit groups off-guard. “It was done with enormous secrecy, stealth and lack of transparency,” Ms Muttreja said.

Good NGOs provide low-cost, last-mile service delivery . . . and don’t ask any questions about why the government isn’t doing it

The legislation was passed just weeks after authorities froze the local bank accounts of Amnesty International, forcing the human rights watchdog to suspend its operations.

“Like the Chinese government, this government has this notion of good NGOs and bad NGOs,” said Ingrid Srinath, director of Centre for Social Impact and Philanthropy outside New Delhi, which promotes strategic philanthropy.

“Good NGOs provide low-cost, last-mile service delivery . . . and don’t ask any questions about why the government isn’t doing it. As soon as you ask questions like that, you become a bad NGO,” she said.

The regulatory changes appear tedious and bureaucratic, and entail a 20 per cent cap on administrative expenses, including staff salaries and a ban on foreign-funded charities granting money to smaller organisations.

But Amitabh Behar, chief executive of Oxfam India, told the Financial Times that the conditions struck at the heart of how non-profit groups work. “It’s going to be such a massive disruption,” he said. “You have made it so difficult you will eventually break the backbone of the sector.”

Mr Behar said New Delhi appeared keen to limit non-profits to providing material relief. “The fig leaf is that ‘if you go and provide services, we are happy with you’,” said Mr Behar. “The hungry need to be fed, the sick need to be taken to hospital, and that is OK.” But, he said, the government’s conditions would constrain activities intended to effect long-term social and behavioural change.

More than 20,000 civil society groups, including charities and think-tanks, in India received about $2.3bn from overseas philanthropic organisations in 2018-19, the last year for which data are available.

Typically, larger, more sophisticated city-based charities receive the money before disbursing some of the funds to smaller groups that work with the poorest and most marginalised Indians in remote areas.

The new restrictions are the latest salvo in a long campaign. Law enforcement agencies have repeatedly frozen the local bank accounts of environmental group Greenpeace as well as Amnesty. In 2017, New Delhi barred the Public Health Foundation of India from receiving foreign donations after its anti-tobacco campaign drew industry ire. 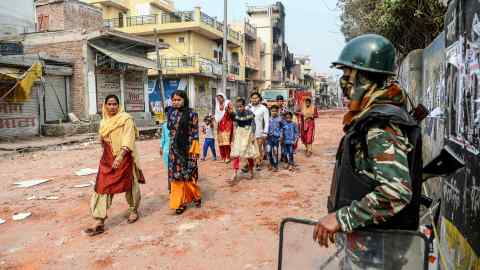 Even as it restricts charities operating with foreign support, India has created a pool of domestic philanthropic funds. Large companies have to donate 2 per cent of their average net profits to social causes, amounting to about $2.4bn in 2018-19.

But much of this corporate philanthropy has been funnelled to Mr Modi’s pet projects, including a national toilet-building campaign and a massive statue of an independence leader. This year, money has poured into PM Cares, his special coronavirus relief fund.

Ms Srinath said independent charities and civil society groups were needed to help India develop innovative social programmes. “What philanthropy should be doing is experimenting, which neither government nor businesses are good at,” she said.

Activists warn that foreign philanthropic funds could taper off. The PFI’s Ms Muttreja predicts that “small NGOs will shrink and large NGOs that give out information that is inconvenient for the government will be closed down”.

8 Ways to Save for Retirement as a Freelancer - EntrepreneurSeptember 28, 2020
PRESENTING: The highest-paying remote jobs you can do from anywhere in world, and they're all hiring right now - Business InsiderSeptember 29, 2020

Which charities do the most good? Charity Navigator joins the effort to answer this crucial question. – Vox.com