Blog
Home Euro News Joe Biden has won, but what does it mean for Europe… and Donald Trump? – Euronews

Joe Biden has won, but what does it mean for Europe… and Donald Trump? – Euronews 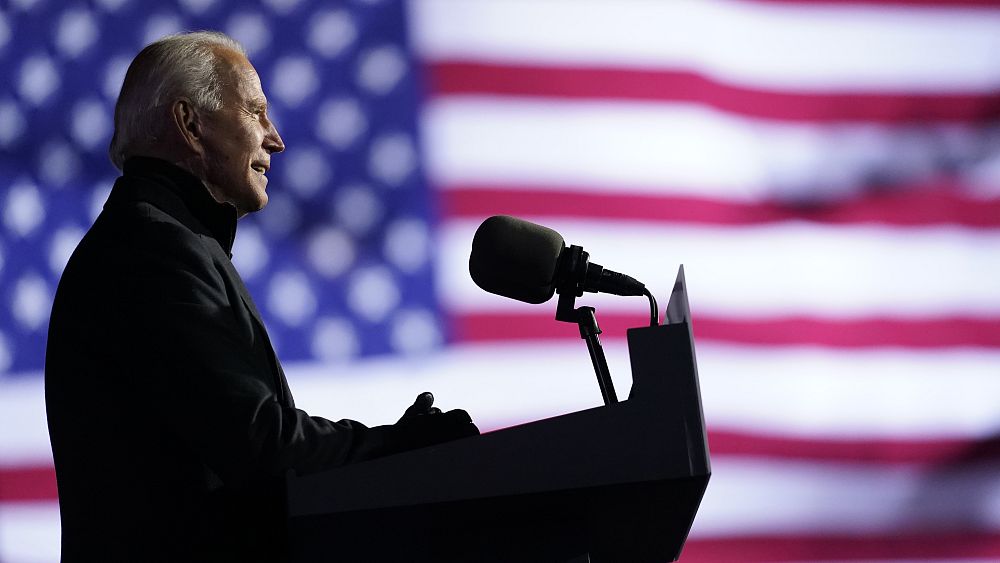 Democrat Joe Biden is now president-elect in the United States after results took days to emerge from key battleground states and with Pennsylvania pushing him past the 270 mark and ensuring victory.

But, now he has emerged victorious, what will it mean for Europe and his defeated Republican rival Donald Trump?

How will Biden being president affect Europeans?

Defence: a reaffirmation of old alliances

Biden will now be put at the helm of the most powerful military in the world — what will he do with it?

His administration is likely to echo many of the bipartisan calls made over the decades for greater burden-sharing within the context of the various alliances between the U.S. and other nations, Rebecca Lissner, a non-resident scholar at Georgetown University’s Center for Security Studies and co-author of An Open World: How America Can Win the Contest for Twenty-First-Century Order, told Euronews.

She also expects to see a reaffirmation of traditional alliances, along with an effort to modernise them so that they are “less like relics of the Cold War and more like the type of international tools that we need to defend against the full spectrum of 21st-century security challenges, many of which are not explicitly military in nature”.

Biden has talked about doing a summit of democracies in his first year in a Foreign Affairs article from earlier in 2020, which Lissner says hints at him taking a less autonomous approach than Trump and prioritising the “democratic allies and partners” who have “long been at the centre of American foreign policy”.

Environment: return to the Paris Agreement

The Democrats campaigned on specific policy ideas, including those which would address the climate crisis, so we have a good idea what Biden’s administration is promising.

As a first, symbolic gesture to US allies and the rest of the world, Biden has committed to rejoining the Paris Agreement as swiftly as possible.

Secondly, it is likely that Biden would look to restore protections and elaborate on policies in place under Trump’s predecessor, Barack Obama.

In order to do so, Biden has promised to spend $2 trillion (€1.7 trillion) on tackling the crisis with the ultimate goal of the US reaching net-carbon emissions by 2050.

Trade: not the end of trade wars

While we can expect changes in trade between the US and EU should Biden win, it will not see the end of trade wars, Edward Alden, a US trade policy expert and Senior Fellow at the Council on Foreign Relations, told Euronews.

Issues which are will remain “very, very difficult” under Biden include digital taxation, as the Democrats are more beholden to the Silicon Valley digital giants like Google and Facebook than the Republicans, he said.

“The Boeing-Airbus (conflict) is not going to go away. And if you look at Joe Biden’s platform, he has promised the most aggressive ‘Buy American’ policy that we have ever seen out of a president,” he added.

Will Trump bow out quietly?

Both candidates have the right to call a recount in most cases if the result in a particular state is close.

The Trump campaign said it would seek a recount in Wisconsin and has filed lawsuits in battleground states Pennsylvania, Michigan and Georgia.

Judges in Georgia and Michigan quickly dismissed the lawsuits there on Thursday.

Some of the Trump team’s lawsuits only demand better access for campaign observers to locations where ballots are being processed and counted. A judge in Georgia dismissed the campaign’s suit there less than 12 hours after it was filed. And a Michigan judge dismissed a Trump lawsuit over whether enough GOP challengers had access to the handling of absentee ballots

Biden attorney Bob Bauer said the suits were legally “meritless.” Their only purpose, he said “is to create an opportunity for them to message falsely about what’s taking place in the electoral process”.

The campaign is also seeking to intervene in a Pennsylvania case at the Supreme Court that deals with whether ballots received up to three days after the election can be counted, deputy campaign manager Justin Clark said.

Initially, state courts will decide if the Trump campaign is right to object to mail-in votes being counted that were received after November 3.

The Pennsylvania Supreme Court had decided to allow election officials to accept ballots postmarked on election day and received through November 6.

But ultimately such decisions can be appealed all the way up to the US Supreme Court, as in the election in 2000 in Florida when there was a recount dispute between George W Bush and Al Gore.

“This is the first time in US history that a candidate has objected to votes that are otherwise legal solely because they were received after election day even though the postmark on the mail shows that the vote was cast before or on election day,” Norman Williams, a professor of constitutional law at Williamette University, told Euronews.

Trump’s former acting chief of staff has said he expects him to run for election again in 2024.

“He does not like losing,” said Mick Mulvaney, speaking at a web session hosted by the Institute of International & European Affairs in Dublin

During the period between election and inauguration of a new US president, usually around 75 days, the outgoing administration briefs its successor in a legally mandated transition on important national security, foreign affairs and other matters.

It also helps the president-elect make personnel decisions about top-level officials. Biden will fill about 7,000 executive branch positions; the 1,200 most important — including the secretaries of state and defence — require Senate confirmation.

Inauguration Day is scheduled to take place on January 20, 2021, when the president-elect and vice-president-elect are sworn in and take office. Biden has selected California Senator Kamala Harris as his vice president.

Trump has cast doubt on whether he will commit to a peaceful transfer of power, often dodging questions on the subject, but US media has reported that his administration has been working with team Biden to prepare for the handover.

Joe Biden's Crypto Impact Is Unclear As He Wins Presidency - CoinDeskNovember 7, 2020
What Biden presidency could bring for higher education - Inside Higher EdNovember 7, 2020