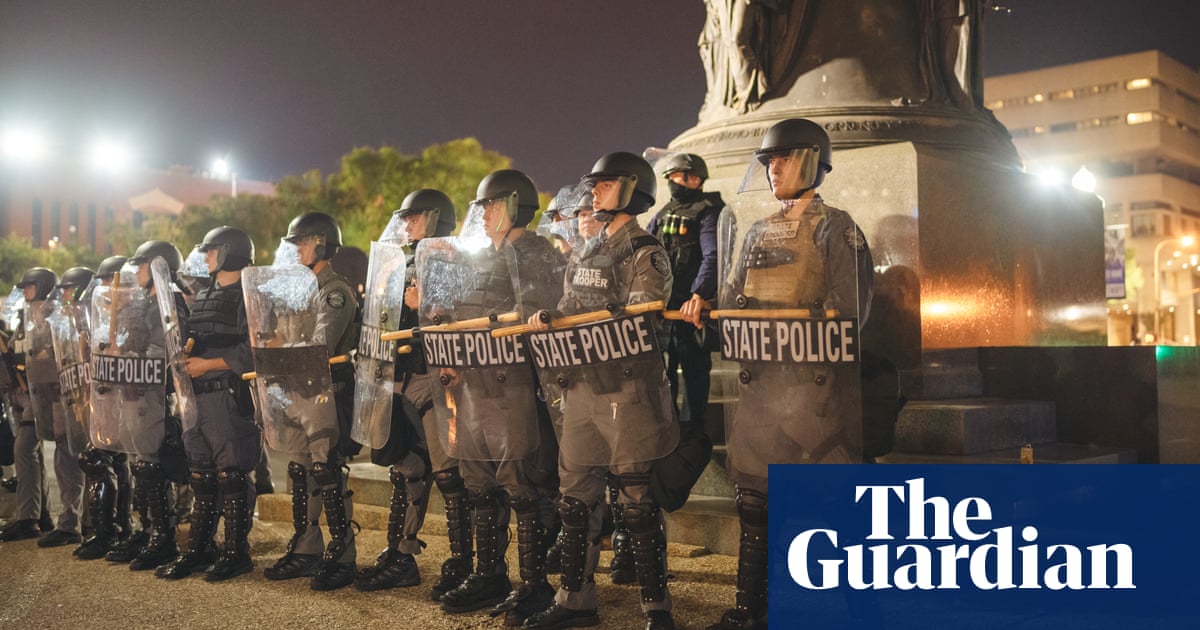 Quotes attributed to Adolf Hitler and Confederate general Robert E Lee appear in training materials once used by the Kentucky state police (KSP) to create “ruthless” warriors who would “fight to the death”.

The instructional slideshow, decorated with a bald eagle and American flag, advises officers to “meet violence with greater violence”. It includes the line “über alles” – a phrase from a Nazi-associated verse of the German national anthem – ironically juxtaposed against a background of American troops in Iwo Jima during the second world war.

“It is entirely inexcusable for the words of Hitler to be used in training Kentucky State Police,” the Anti-Defamation League tweeted on Friday.

The genocidal führer is quoted more than any other figure in the presentation, on three separate slides. “The very first essential for success is a perpetually constant and regular employment of violence,” reads one of the citations.

A quote attributed to Lee, meanwhile, touts the importance of “truth and manliness” in a slide titled The Thin Gray Line. During the American civil war, Confederate soldiers who betrayed the Union wore grey uniforms.

The training’s explosive contents were first reported by Manual RedEye, a high school news publication in Louisville, Kentucky, after a local attorney uncovered the slideshow while requesting information about a detective who shot and killed a man.

Lt Josh Lawson of the KSP told student reporters that “the quotes are used for their content and relevance” to teach “topics [that] go to the fundamentals of law enforcement such as treating everyone equally, service to the public, and being guided by the law”.

But Morgan Hall, the communications director for the Kentucky Justice and Public Safety Cabinet, called the controversial material “unacceptable” and said it had not been used since 2013.

The slideshow’s title page includes a subhead with the name of Lt Curt Hall, who according to LinkedIn was a decades-long veteran with Kentucky law enforcement.

“As a Kentuckian, I am angry and embarrassed,” congressman John Yarmuth, a Democrat, wrote on Twitter. “And as a Jewish American, I am genuinely disturbed that there are people like this who not only walk among us, but who have been entrusted to keep us safe.”

He continued: “And don’t give us the ‘it’s a few bad apples’ excuse. This is a poisonous culture that has gotten too many innocent people harassed and killed, and we refuse to stand for it any longer.”

More than a hundred people have been shot and killed by police in Kentucky since the start of 2015, according to a database published by the Washington Post.

Breonna Taylor, a 26-year-old emergency medical technician, died in March after Louisville police raided her apartment and shot her. When no officer was charged directly with Taylor’s death, Americans across the country took to the streets in protest, decrying yet another example of Black lives cut short by police violence.

RSLvSKC Quotes: “It’s a really proud moment for the club, the staff, the team and the fans” – Sporting Kansas City