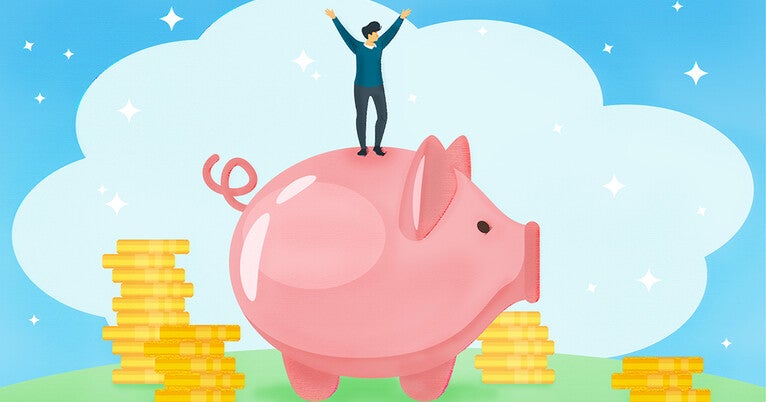 Money might not buy love, but a new study suggests that it is more strongly related to happiness than some people think — particularly when people compare their income with someone else’s.

Writing in the journal Psychological Bulletin, researchers describe an association between people’s subjective socioeconomic status — how they perceive their own income, education, and occupation standing in comparison with others — and happiness.

That association, they say, is significantly larger than the connection between people’s objective socioeconomic status — as measured by income and educational attainment — and their level of happiness.

“There is a conventional wisdom in social science that relationships and experiences are more important than money in producing happiness,” said co-author Michael Kraus, associate professor of organizational behavior at the Yale School of Management. “But we found that when people consider their wealth relative to others, there is a stronger association between money and happiness.”

The study, which was led by Jacinth Tan, an assistant professor of psychology at Singapore Management University, contradicts decades of social science research that shows a weak relationship between money and happiness, particularly in wealthy societies, the authors say.

“The size of the relationship we observed in our study has policy implications in the sense that lawmakers must acknowledge that the relationship between money and happiness remains consequential and cannot be ignored,” said Kraus. “Policy considerations that help people obtain good jobs and protect people from financial ruin during this pandemic may have an added benefit of improving people’s happiness.”

The new research was motivated by an apparent disparity in previous research that has showed weak links between income and happiness and the idea that many people actively seek out prestigious jobs and higher status, the authors say. Moreover, as inequality has increased in some societies (including the United States), overall happiness has declined. That outcome wouldn’t be expected if wealth and material resources were inconsequential, the researchers say.

This gap between research findings and observation suggests the possibility that objective measures, such as income, do not adequately capture the influence of money on happiness, the researchers said. They wanted to test the idea that happiness is more dependent on what people think they have compared with others than how much they do have.

For the study, the researchers performed a meta-analysis of 357 different studies that have examined questions related to associations between objective and subjective measures of socioeconomic status and people’s subjective wellbeing — their sense of happiness and life satisfaction. Collectively, those studies involved data from more than 2.3 million participants gathered in publicly available datasets, such as the World Values Survey, as well as in private datasets.

In their analysis, the researchers applied the MacArthur Scale of Subjective Status — a 10-rung ladder in which people indicate their perceived social status — to test the association between comparative resources and happiness. Their findings suggest that that social comparison is an important driver of how much money or material resources will increase happiness.

Tan pointed out that social comparison can lead to unhappiness when a person determines their status compares less favorably to others. She cited a quote attributed to Mark Twain: “Comparison is the death of joy.”

“Our findings also suggest that improving from past levels of material resources alone is insufficient for increasing happiness,” she said. “Even if people today are earning higher wages or attaining higher educational levels than their parents or compared to 10 years ago, there is going to be limited impact on their happiness if they are not doing at least as well as, if not better than others at the present. In people’s minds, social mobility is not simply the ability to ascend one’s own socioeconomic ladder, but also to ascend the ladder of the broader, collective society.”

Dave Ramsey warns: Don't do these 10 things with your money - Yahoo MoneyNovember 3, 2020
Russell’s Safety Car crash looked silly, but it’s easier to do than you might think – trust me - Formula 1 RSS UKNovember 3, 2020

How much have you got? Breaking the taboos on money – The Guardian