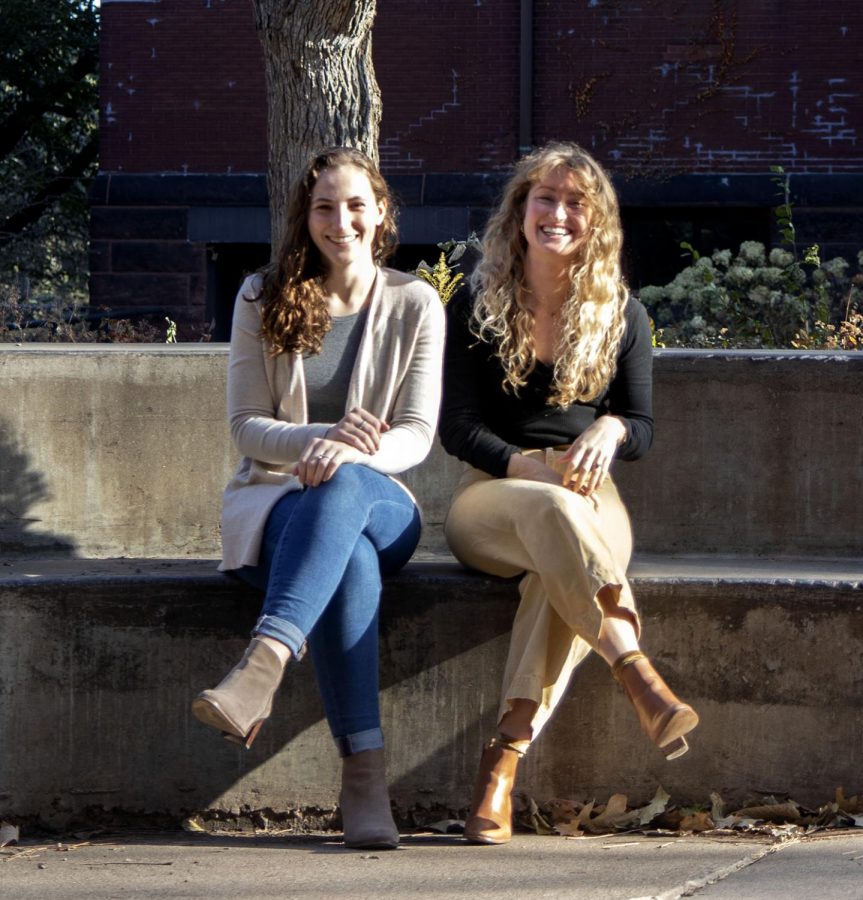 Mentorship program co-founders Kate Carosella, left, and Meriah DeJoseph pose for a portrait at the Institute of Child Development on Sunday, Nov. 8. The program serves students from underrepresented backgrounds who intend to pursue doctorates in psychology.

The Next-Gen Psych Scholars Program’s first event will take place online and introduce mentors and mentees as well as feature a speaker panel. The 2020 Tri-Psych Graduate Student Diversity Fund provided $1,000 to kickstart the program in an effort to provide opportunities for students to diversify psychology fields.

The two graduate students behind the program, Meriah DeJoseph and Kate Carosella, worked together to coordinate and apply for the grant. In October, they received the money to start the program, Carosella said.

“That gave us a month and a half to pull this mentorship program together in order to be helpful for those people who are applying this cycle,” said Carosella, who is a first-year Ph.D. student studying clinical science and psychopathology research.

The mentorship program will consist of online informational sessions and small group workshops to prepare mentees applying to graduate school as many application deadlines are Dec.1.

Carosella added that many mentees are still undecided about applying to graduate school this upcoming year and are considering other options.

Since October, more than 250 mentees and 75 mentors across the nation have joined the mentorship program.

“They’re from all over the place, which I found just really inspiring that we were able to get such reach on this program and that it was so well received,” Carosella said. “That was something that made me happy.”

DeJoseph is a first-generation student, meaning she is the first in her family to earn a four-year degree. She said she grew up in a low-income community that lacked many of the resources she needed to be fully prepared for college or graduate school.

Despite those early challenges, her two mentors she gained from working at New York University supported her and encouraged her to apply to graduate school.

The mentors “taught me how to advocate for myself and not apologize for the challenges I faced – they were open about the many challenges they faced themselves and in doing so made me feel like I belonged in academia,” DeJoseph said in an email. “This is the kind of support I’m hoping [the Next-Gen Psych Scholars Program] brings to other prospective PhD students who have been historically underrepresented in psychology.”

Romulus Castelo, a second-year Ph.D. student and mentor in the program, immigrated to the U.S. with his family from the Philippines when he was 10 years old. He said he had different interests before pursuing a psychology major and a minor in neuroscience. It was not until he attended undergrad that he learned about the possibility of doing a Ph.D. program, he added.

“A lot of the success that I’ve got now and my admissions to graduate school, I think I will certainly attribute to a lot of the mentors that I’ve had help me,” said Castelo. “It motivated me to be on the other side now and serve as a mentor to pay it forward.”

Anita Kwashie, a fourth-year Ph.D. student and president of the Association of Multicultural Scientists, is also a mentor in the program. As an international student, she said, unlike domestic students, she had to hustle for opportunities because of restrictions on her visa.

“I never really had a Black professor that didn’t explicitly teach something related to Black history,” Kwashie said. “I went through my entire education career without having visible proof that someone who looked like me could do what I wanted to do.”

African Americans and Black Americans are three to four times more likely to be misdiagnosed with psychotic disorders than white people, according to an article in the World Journal of Psychiatry. Despite comprising 13% of the U.S. population, only 4% of psychologists are Black.

“I think this program is trying to democratize psychology and basically say that not only do we want to eradicate systemic barriers that prevent people from getting involved in psychology research, we also want to show that psychology will be stronger for including more people and not weaker,” Kwashie said.

Clarification: Parts of Meriah DeJoseph’s interview have been edited after publication to add more context to her experience of applying to higher education.

The story has also been updated to more accurately reflect the number of mentees in the program.

The pandemic has compounded the challenges facing museum freelancers - Museums AssociationNovember 9, 2020
The iPhone 12 Mini is OK for small hands, but the Max is the really new thing - CNBCNovember 9, 2020

Donald Trump, Political Psychology and the Childhood Roots of Anger – The Wire Science

Meet the Woman Teaching the Psychology of Survival | Outside Online – Outside