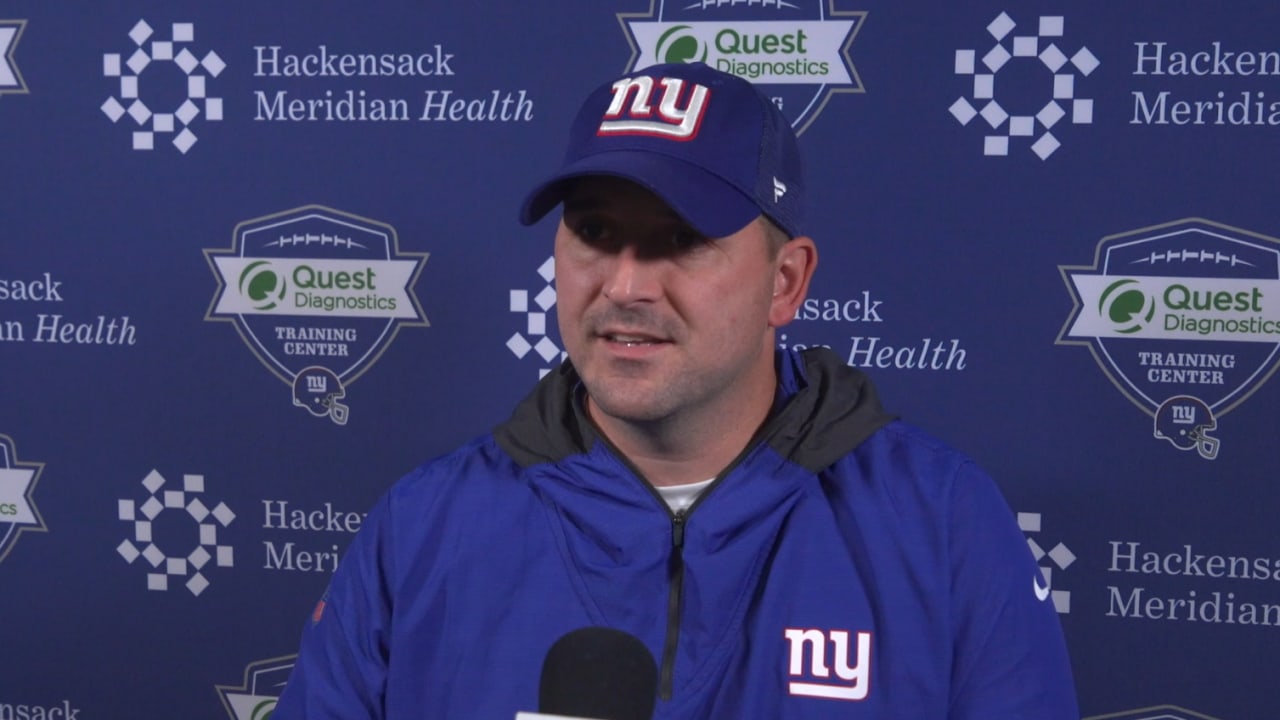 Q: What level of concern do you have for Darius Slayton? Not just his ability to dress but his ability to play for four quarters in this game? We see him on the injury report.

A: He was on the injury report. He was out there working with us yesterday. We pulled him back a little bit on some of his stuff, but we’ll see how he is today. I’m expecting Darius to play. If the trainers tell me otherwise, they tell me otherwise.

Q: When you look at Washington, what do you see from Landon Collins on tape?

A: He’s an aggressive player. I think he’s probably his most productive when he’s close to the line of scrimmage. He’s a guy that triggers real fast, makes a lot of plays close to the line of scrimmage or even in the backfield. He’s definitely an aggressive player in space. He’s going for the big hit a lot of times. He’s got good instincts in the back end of the field. He’s shown a good awareness as far as really keying in on the quarterback’s eyes and making good breaks and play that quarters coverage or that buzz safety when he comes on down in single-high looks. He does a good job of really playing with the quarterback. When he gets a shot, he’s going to swing for the fences.

Q: There’s been a lot of talk about hearing what the quarterbacks say this year on the TV broadcast. So, you actually watch the TV copy as well as the coaches film?

A: Yeah, I’d say probably every team in the league probably watches the TV copy. You’re looking for anything you can to help prepare your team and find an advantage.

Q: So, you have to sit there and listen to storylines and all that stuff too while you’re watching it?

A: Well, we have some different personnel in the office that kind of cuts on through and chops things up for you, and makes you aware of things you have to look at.

Q: I just want to go back to the receivers for a second. Obviously, (Golden) Tate was injured earlier, (Sterling) Shep’s been injured a lot. I think going into the season, receiver was looked at as kind of a strength of this team, and you guys have had to use (Damion) Ratley before this, (C.J.) Board, now Austin Mack. Are you guys a little undermanned at receiver right now?

A: No. I think all of our guys that are here on our roster right now are preparing hard to play and they give their best every day. They’ve done a good job working through some scenarios. We’re anxious to get them on the field this Sunday and play.

Q: Board and Mack, obviously, have a lack of experience. That’s not something you worry about? I’ve heard you say before that everybody on the team, once they’re on the team, you don’t worry about rookies and whatnot.

A: No. Everyone has the same responsibility to show up every day, do their job, learn their assignments and execute. Your level of experience is irrelevant. It’s what you do within each game plan and how you execute on the field.

Q: Should we read into the fact that Sterling Shepard wasn’t activated yesterday that there’s a good chance he’s not playing Sunday?

A: I wouldn’t read too much into anything until we see how it goes in practice today. I’m going to check with Ronnie (Barnes) when we leave here right now, see what the plan is for the day. He’s been making progress every day with the trainers. Today is another opportunity to kind of see where he’s at.

Q: Just to kind of round back to a previous question about watching the TV copy, is that something new this year because of the things you can pick up like quarterbacks calling out signals and stuff that maybe you did this year? Or have you guys, the way you’ve done things always, watch the TV copy?

A: I’ve always been involved with watching TV copies. I can’t speak for anybody else around the league. I know it’s not a new thing conceptually, just in big picture. I think this year is a little bit different in terms of the amount of things you can actually hear. In the past, it may have been certain select nationally televised games because of the amount of microphones and cameras. Sometimes it actually helped you based on the score and situation of the game. Was it a quieter crowd? Who were you watching? It’s tougher sometimes to get signals from some teams that have louder crowds at home games, things like that. But you’re always looking for any advantage you can. I’d say for us, it’s nothing new. I can’t speak for everybody, but I do know other teams have been doing it for some time.

Q: If you believe weather reports, I don’t know if you do or not, there is a zero percent chance of rain on Sunday. Why is it important for you to have your team outside today on the grass in the pouring rain?

A: Today is a great opportunity for us to work on fundamentals. When you go on wet grass, you really emphasize your players playing with their feet under them, ball security as ball handlers, quarterbacks and receivers making sure we’re sharp on that. Defensive players make sure we really get our cleats in the ground, we don’t slip and slide all over the place. Just in general, any chance you get the opportunity to work in weather, you have to use it, use it to your advantage. Whether it’s wind, snow, rain, hard sun, whatever it may be, you may not get this opportunity again. The next time we see rain may be in a game on Sunday. So, we always use every situation we have to prepare ourselves.

Q: I know you’re not a guy that walks out there afraid all the time, but do you have to weigh that slippery field, grass, guys slipping, guys getting hurt, versus what you’re trying to get accomplished?

A: No. It’s our responsibility as coaches and players to go out there and prepare for practice. That includes warming up our bodies correctly. It means playing with our feet under us. It means having the right equipment on, so the right cleats to match the weather conditions and the grass and the surface that we’re on right there. Look, it’s football. We’re going to go outside, whatever it is, and we’re going to use all of the elements to our advantage every time we can.

Q: What would a win mean for this team right now?

A: I think it would mean the same thing it means to us every week. We prepare hard. We want to see results. We want to get this for the fans. Look, it’s the NFL. Every week, everyone is training and playing hard to get the win. For this team, it’s no different. We go out there every week, we give it our all. We want to make sure we don’t make mistakes to set ourselves behind. But for us, it’s just about one game at a time. What we’re trying to do right now is go 1-0 this week.

Q: Chances David Mayo makes it back this week as well?

A: He’s been practicing the last couple of days. He’s making a lot of progress. Obviously, we’ll talk about the actives and inactives. He’ll be in that conversation for us. We’ll see where he’s at after today.

Q: What have you seen from Sterling Shepard so far?

A: I’ve just seen he’s been working tirelessly. He’s made a lot of progress in terms of from where he was when he got hurt in Chicago to physically where he is now right there. I just saw him in the weight room two seconds ago. He’s in good spirits. He’s obviously anxious to get back out on the grass. We want to see him back out there as soon as possible. But we just need to make sure we make the right decisions for him long-term medically.

Q: I don’t think we asked you about Austin Mack the other day when you guys brought him up to the active roster. I’m just curious what has he done to separate himself from the rest of the receivers that you guys have carried from the summer on your practice squad? What do you expect from him if you put him out there on Sunday?

A: I would say this. Independent of anybody else who’s been on our roster, just reporting on Mack, he’s definitely a guy that’s been consistent for us from day one. This is a guy that prepares very well, he plays with a high motor, he plays very hard. He’s a young guy, but he does a lot of things in terms of instincts that helps him make the right decisions on the grass at full speed. This guy plays full tilt all the time. I’m very pleased with his work ethic. He’s a guy that when he was working on some of our look teams, really gave our guys fits in different scenarios. We rep all of our guys with our units at all times. He’s been working with our game day active roster since day one in terms of getting ready for Sunday games. We always prepare them. He’s traveled with us to multiple games now in terms of being ready in case something were to happen with COVID. We just thought at the time that he’s done a good enough job and he’s earned the opportunity to get on the grass and play for us. We’ll see where that goes active wise this Sunday. But he’s earned the right to be on the 53.

Which charities do the most good? Charity Navigator joins the effort to answer this crucial question. - Vox.comOctober 16, 2020
Virginia board of education approves expansion of African American history in classrooms - WTOPOctober 16, 2020