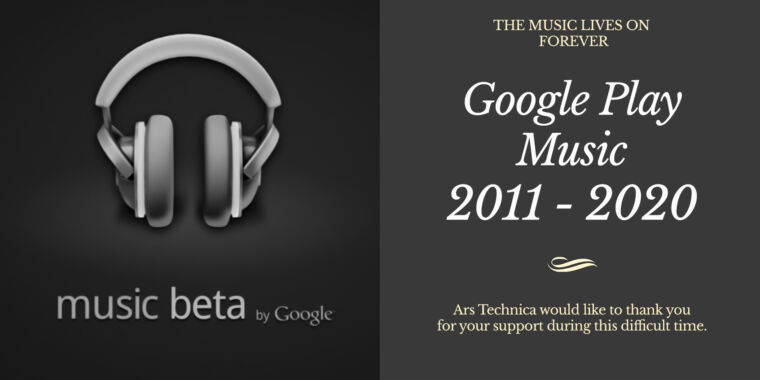 Google Play Music died last week. We’ve known this was coming for some time, and nothing ever happens across the entire Google user base all at once, but many bereaved Google customers are reporting a total loss of life for Google Music. For me the store is gone, speakers no longer work, the app is dead, and the website is dead. It’s all gone.

The shutdown wave seems to be rolling across the Google Music userbase as you read this, and even if you still personally have access to some parts the service, you probably won’t have much time left to say your goodbyes. Google Music, born May 10, 2011, will leave us after nine wonderful years.

The service will now join Reader, Google+, and countless other products in the great Google graveyard in the sky. Covering the Google news beat in this day and age basically means running a full-time funeral parlor, and just as we did for the death of Google Inbox, we’re here to peacefully guide Google Music into the afterlife with a proper send-off. Thank you for being here today as we celebrate the life of Google’s trailblazing music service.

Google Music Beta—Is this even legal?!

Google Play Music debuted at Google I/O 2011 as “Music Beta by Google.” Music Beta was announced alongside the launch of Google Movies on the Android Market store, which was the precursor to Google Play. Combined, the Movies and Music were meant to take on Apple’s iTunes media juggernaut. Android was still chasing Apple’s superior ecosystem, and one of the holes Google needed to plug were quality media services.

Until Music Beta launched, there was no music service at all from Google, just a basic local music player on Android. Google felt so strongly that it needed something to counter iTunes that, in the early days, it actually ended up shipping the Amazon MP3 Store in Android 1.0. It was the only pack-in third-party app and I guess the first-ever instance of Android crapware. With Google Music, Google didn’t need Amazon anymore.

iTunes was the industry leader at the time, letting iPhone users shop for music and movies from their computers or phones. Apple was lagging Google in cloud computing though, so for at least a few months longer, any iTunes syncing meant plugging in a cable and doing a big transfer process. Google Music was pitched as a next-generation cloud service that, as Google mentioned several times in its presentation, meant you never needed a cable and never needed to run a local sync. Upload your music to the cloud and Google Music would seamlessly make your music collection available across all your devices, using the power of the Internet.

Uploading music was the requirement for Google Music Beta because, when it launched, there was no music store whatsoever. While Apple dragged the music companies, kicking and screaming, into the modern Internet era with paid-for downloads, Google couldn’t get a music license deal done during the beta. To quote Ars’ Ryan Paul in his initial hands-on, “During a press briefing at Google I/O, the company said that it had initially sought licenses but was unable to establish mutually acceptable terms with the music industry. The negotiations eventually broke down and Google decided to continue the project on its own.”

Google Music Beta was strictly a bring-your-own-music service, but back then there was actually some question as to whether that was even legal. It seems crazy today to ask, “Is it OK to store my files in the cloud?” but music industry lawyers are doing their best to slather a heavy layer of FUD over the whole idea.

Amazon poked the bee’s nest first with the surprise launch of an “unlicensed” music locker service earlier in 2011, and Sony Music’s saber-rattling response was that it was keeping its “legal options open.” Ars’ Timothy B. Lee wrote a whole article addressing the question, pointing out that one of the first BYOM cloud-streaming services, MP3.com, was crushed by the music industry in the 1990s. Google and Amazon both chose to charge ahead under the claim that streaming your own files was fair use, and they would deal with any questions in court.

You can still feel the icy hand of Google’s legal department in the original Music Beta invite, which helpfully informs the user at the bottom that “Music Beta is only for legally acquired music.” You’ve got to super-seriously pinky promise that none of your music came from LimeWire. Checkmate, music pirates.

A big part of Music Beta was the Music Manager app for Windows, Mac, and (two months after launch) Linux, which would upload your entire music collection to the cloud, where Google let people store up to 20,000 tracks for free. From there, your music would work on any client. It was specially designed to work well with iTunes and Windows Media Player, and would grab playlists, play counts, and ratings from those apps.

The beta launch was in the typical style of Google betas at the time, where an invite system reduced the initial ramp-up load. Early members signed up and waited for the fateful day when an invite would hit your email inbox. About two months into the beta, existing users were able to invite friends.

The beta launch clients were for Android and a Web app at music.google.com. The Web app required Adobe Flash to play music (remember Flash?), meaning, at the time, it worked on just about everything that wasn’t an iPhone. The website was good-looking, with a black-text-on-white design and blue and orange highlights that matched a lot of the Android Market aesthetic at the time. There was a navigation pane on the left, a big content section on the right, and a player at the bottom. It looks positively modern compared to the YouTube Music Web app, which looks like a big phone app.

While the Google Music Web app was a straightforward, simple design that wouldn’t look that out of place today, for a long time Android app kept getting stuck with some, uh, interesting ideas about UI design. The app worked on Android 2.2 Froyo and up, and there was even a special tablet version for Android 3.0 Honeycomb, the first version of Android to support tablets. These were the dark days of Android UI design when Google had no guidelines at all, and the company would ping-pong between different styles depending on what month it was. Various bits of UI rarely matched anything else, and the app would give different looks depending on what OS you were on. The phone version of the app had this fuzzy glass background and glossy, rounded gradients for all the main buttons, and then from there, it would pull in native UI widgets from the operating system. On 2.3 Gingerbread, this meant flat gray and black OS menus that clashed with the shiny, glassy UI of the app. On Honeycomb, the app has a fuzzy glass background, flatter buttons, and blue, Tron-inspired laser-beam UI bits pulled in from the OS. On Honeycomb—because the app-supplied UI pieces and the OS-supplied UI pieces were made at the same time—the app, by pure luck, actually looked cohesive.

The new normal balancing act. How to manage both remote and on premises teams - CIOOctober 28, 2020
Belk Invites Customers to Shop Exclusive Holiday Deals While Giving Back to Local Nonprofits During November Charity Sale - PRNewswireOctober 28, 2020