One of the few good things to be said about this very bad year is that by the time Black History Month came around at the start of October, it didn’t feel like an isolated commemoration so much as a further prompt in an ongoing project. Since the global Black Lives Matter protests this summer, a fresh popular syllabus on black history, culture and anti-racism has begun to be constructed. Reading lists have been compiled by the dozen; viewing lists too, though as soon as you start to build one with a British focus, the enduring gaps and blind spots of a national cinema become soberingly apparent.

Black British history remains the most occasional concern of a film industry that churns out historical cinema by the bucketload. Steve McQueen’s Small Axe film series – telling five separate stories from London’s West Indian community between 1969 and 1982 – will offer viewers a rare retrospective view of black British society when the BBC airs it next month. But many of the most essential screen studies of black history in Britain are not period pieces, but contemporary films that have become history themselves.

First among these is Horace Ové’s 1976 film Pressure, now available to stream on the BFI Player. The first feature-length film ever made by a black director in Britain, this drama of generational conflict within an extended Trinidadian family living in London is marked by the kind of vital everyday observation that you don’t get in past-tense film-making. Centred on young school-leaver Tony as he defies his elders’ complacency to follow his older brother into the Black Power movement, it’s a gripping, in-the-moment essay on the legacy of the Windrush generation.

But much of the most illuminating historical viewing is to be found in their free archive of Black Britain on Film shorts, which range from A World Is Turning – 45 minutes of fascinating rushes from a never-completed 1948 documentary dedicated to black British talent in arts and sciences – to Jemima + Johnny, South African director Lionel Ngakane’s influential 1966 short depicting the friendship between a white boy and a newly arrived Jamaican immigrant girl in a Notting Hill still bearing the scars of the 1958 race riots. Go browsing and be surprised.

The costume drama, that venerable mainstay of British cinema, has steered largely clear of black history before and since the elaborately attired exception of Amma Asante’s Belle (on iTunes), a somewhat speculative biopic of mixed-race 18th-century heiress Dido Belle, born illegitimately to naval officer Sir John Lindsay and raised to gentility by his family. Luminously led by Gugu Mbatha-Raw, it’s a deceptively defiant film, one that assumes the genteel trappings of a white genre to query history. Compared to Michael Apted’s earnest but obtuse 2006 film Amazing Grace (on Amazon Prime), a portrayal of the legal undoing of the British slave trade that offers only one role of any consequence to a black actor, it seems to come from another era.

As you might expect, it’s in the field of documentary where black British history has been most thoroughly explored, whether in straightforwardly educational projects such as the BBC’s Black and British: A Forgotten History and The Unwanted: The Secret Windrush Files — both steered by historian David Olusoga, both available on the iPlayer — or more sinuous artistic essays like John Akomfrah’s The Stuart Hall Project, a study of the trailblazing cultural theorist that manages to be both expansive and stirringly personal, moving to the rhythms of its Miles Davis-heavy soundtrack. It proves why documentaries such as Netflix’s absorbing but somewhat mechanical Forbidden Games: The Justin Fashanu Story – a portrait of the late, openly gay black footballer, made by two white film-makers – would do well to seek a more diverse, idiosyncratic perspective behind the camera. There’s work to be done yet.

Also new on DVD and streaming 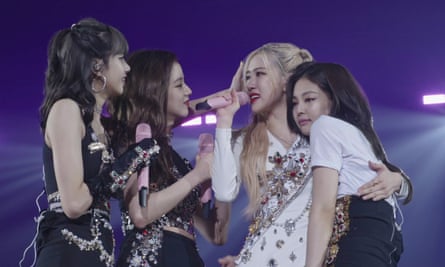 K-pop band BLACKPINK in the Netflix documentary Light Up the Sky. Photograph: Netflix

Matthias & Maxime
(Mubi, 15)
Another standout streaming release from the summer coming to DVD and Blu-ray, Xavier Dolan’s latest ponders the ambiguities of an ostensibly platonic male friendship — a satisfying back-to-basics reset for the director after some bloated disappointments.

BLACKPINK: Light Up the Sky
(Netflix)
If you’ve been left behind by the current mania for K-pop, this Netflix documentary on the rise of girl group phenomenon BLACKPINK — from Salt Fat Acid Heat director Caroline Suh — will leave you feeling a bit more informed, and very, very old.

Merchant Ivory Collection
(Curzon Artificial Eye, 18)
Once unjustly scorned as middlebrow heritage cinema, the Merchant-Ivory partnership has been enjoying a critical reappraisal of late: you may not need a reminder of Howards End’s virtues, but this four-film boxset also includes restorations of earlier, underrated adaptations of The Europeans, The Bostonians and Quartet.

Make Money via PayPal by Joining Free Online Survey Websites - The Good Men ProjectOctober 17, 2020
Working from home is here to stay, so let's get it right - The Japan TimesOctober 17, 2020

Call for entries: 2nd WHO Health for All Film Festival – World Health Organization