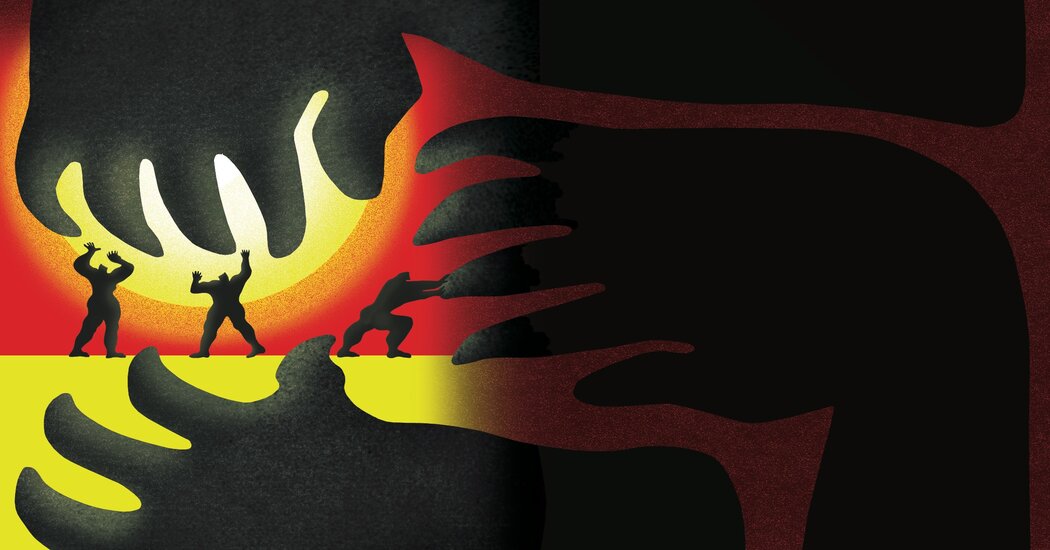 I loathe the idea of a topical movie. The process of filmmaking doesn’t even really allow for it. A tight turnaround from idea to distribution is two years. If you started writing a screenplay when the N.F.L. made the rule requiring players to stand for the national anthem, you would be wrapping up the edit right around the time Minneapolis began to burn. To be on time, you have to think years ahead, or else have an intuitive understanding of the history and form of a society.

“The Purge” is always on time. The franchise, created by James DeMonaco, operates around a simple but provocative premise: After years of rising crime and societal breakdown, a quasi-fascist government is swept into power promising to restore peace by instituting an annual bloodletting — one night when all crime is legal. Each entry finds a different group of Americans just before the purge is set to begin. It’s a tidy narrative conceit promising violence and a ticking clock. That it has been a wildly successful series even though it dumps its main characters — generally played by semi-recognizable TV actors — with each iteration is shocking enough. What’s more impressive is that it manages to do it in the tradition of the best B movies: They are cheap and willing to wallow in the muck, and consequently less likely to lie about the violence that underpins American law and order.

Although they’re rarely mentioned in the same breath, it’s notable that the franchise came from Blumhouse, the same company behind “Get Out.” It has put together a string of projects whose animating principle is asking “Who will survive in America?” These movies commit to portraying our society in a way that finely calibrated awards-season films rarely do. Oscar bait’s great sin is not artistic pretension; it’s a lack of curiosity. We have developed a tradition of quality for our big “message” films — well shot, well acted, well made, redemptive and toothless. The better fare is praised for humanizing its characters, as though the realization that the working class also falls in love, faces disappointment and makes meaning were some sort of mind-bending epiphany. In these movies, a few good men can always outrun a history of violence. Realism reigns over the art form, yet it keeps returning to the same story: “Things might be bad, but they’re getting better all the time.” In the real world you might ask: “For whom have things been getting better?”

Far from comforting fantasies, the “Purge” movies are shrieking depictions of the shape of political life. They concern themselves with the fact of the power men have over women, white people over Black people, the rich over the poor. Even under a regime of legalized crime, violence runs in the same riverbeds as it does now. “Purgers” often wear garish masks in the movies, but they can’t resist tearing them off and exposing that they are exactly who you thought they were.

Just as in John Carpenter’s films, to which this franchise is deeply indebted, the politics can be blunt. In one film, a man threatens a woman he knows because earlier, before the purge began, she rejected him; in the fourth installment, the inhabitants of public housing must fight a racist militia full of war-on-terror mercenaries bent on wiping out welfare recipients. This movie, a prequel to all the rest, reveals that the purge began as a concerted effort to eradicate the poor. Carpenter beat them to it in a few ways, but questions about who really runs things have not become any less pertinent since the 1980s.

With B movies it is in the eye of the beholder whether something is ham-handed or merely concise. In the first “Purge,” over the span of a few minutes, a Black man seeks refuge in a white family’s suburban palace, and the father of the family living there tries to shoot him, only to be ambushed by his teenage daughter’s boyfriend — who has arrived to dispense with the disapproving father. Patriarchal possessiveness, economically segregated housing and white supremacy all come together in an exchange of gunfire. “Things like this are not supposed to happen in our neighborhood,” the father asserts. “Well, they are happening,” his wife replies.

The dialogue does not reach the heights of August Wilson, but the action admits to fears that are often too unseemly to acknowledge. In 2013, the film asked you to imagine the owners of suburban mansions toting long guns while screaming at a Black person to get off their property. Seven years later, the McCloskeys, a St. Louis couple famous for doing just that, spoke at the Republican National Convention. Indulging in the grotesque is what has given these films their prescience.

However gloomy they may sound, the films do offer a way forward. Unlike with our rosier movies, hope does not reside in a preternaturally gifted member of an oppressed class. Each film ultimately argues that the only way out is through collective action. Families, neighborhoods, revolutionary cells — all must band together if they expect to do so much as survive one night. This is perhaps the franchise’s most sustained belief. In the era of superheroes’ teaming up with the C.I.A. to defeat terroristic supervillains, “The Purge” depicts ordinary people willing to protect and support one another in the face of a political system abandoning them to a cruel fate. If there’s any lesson for the political artist to be found in these films, it is this: It’s better to be clumsy in the pursuit of an ugly truth than eloquent in telling a flattering lie.